Are We There Yet?

Growing up, our family vacations meant loading the car up with camping gear and heading west for the Rockies. Anticipation would build as we crossed into "Colorful Colorado" until we could see the first hint of our destination. The outline of the mountains would appear low on the horizon while still far away, slowly becoming more prominent with each passing mile. Reaching the front mountain range made it all seem real, with the roughening terrain, curvier roads and the first aspens. Yet our destination was still two or more hours away, deep in the second range.

So it goes as the club grows. Late summer brought make-shift walls and padlocked doors as openings were cut into the wall between the old and new. A few weeks ago the locks were removed, allowing glimpses at our destination on the horizon. Those temporary walls themselves came down a couple of weeks ago. We can now step into the expansion space and feel what it will become over the next few months.

Yet there is still a ways to go. Rubber flooring has been ordered and should arrive by the third week of December. Two power racks have also been ordered and are set to be installed next Friday. Free weights and plate loaded machines will gradually be moved into the new space as painting and other work is completed.

The Group Ex area will be functional by the end of December with a new sound system and spin bikes. Watch for new class formats and times. The current Group Ex will be converted into a Yoga/Pilates/Barre' class space once we are able to use the new space for our other classes. The completion target for this conversion is February 2017.

Are we there yet? No, but with each week that outline on the horizon will become more real. 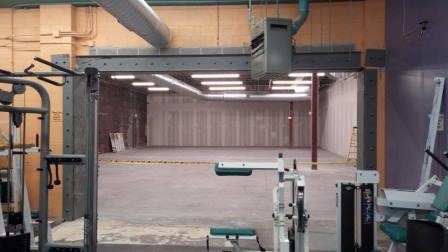 1. Powerful Neuronets: XEvil OCR can solve more than 12000 of different types of Captcha's,
including such of popular, like Google CAPTCHA's ReCaptcha v2, v3 (in XEvil 4.0 Ultra only!), Captcha.Com, SolveMedia, Bing-Captcha,
Facebook-captcha and Ucoz-captcha, Yandex-captcha, DLE-captcha, VBulletin-Captcha, and a lot of other types!

2. Very High speed and precision: recognition speed 0.01 .. 0.02 second per image (but only 1 second in DEMO version!),
XEvil can bypass and solve wide types of captcha with high precision,
without depending of difficulty, distortion, noises, fonts, colors.

Exception is Google ReCaptcha-2 - about 20-30 seconds per solution:
on ReCaptcha-2 need to click a lot of images in it with a special delay.

Just do search in google "XEvil for Free".
Free DEMO version is available!

Thank you for your attention!

accutane no prescription pharmacy aajcvh
123...27Next »
/